Frank & Denise visit "The Land of the Morning Calm"

Kim and I are sorry about the lack of posts around here over the last month.  We did not really have much going on until about 2 weeks ago when my parents arrived in Seoul.  They stayed here for 2 weeks and we were very sad to see them leave.   I tried to show them as much as possible as well as introduce them to all the tasty Korean dishes that Kim and I have come to love.  Kim and I were only with them for an extended period of time during the weekends since we had to work so during the week they were on their own.  I was very proud of how well my parents were able to navigate through the city as well as how adventurous they were at trying new food.  I did not take as many pictures as I should have but my mom took a ton and she will email them to me soon so that I can post them.  The ones that we took on our camera will have to do for now.
We bought tickets to a popular show here in Korea called "Nanta".  It is a comedy about four chefs trying to prepare a last minute wedding meal.  The show is a mixture of slapstick humor and percussional music.  While the show was extremely funny, I really enjoyed how the cast used different items in the kitchen to make music.  There are a few parts of the show that has audience participation.  Both my mom and dad were lucky enough to be pulled on stage.  Below is a video of my dad.  He's the one in the blue shirt and khacki's. Sorry, the quality is very bad. 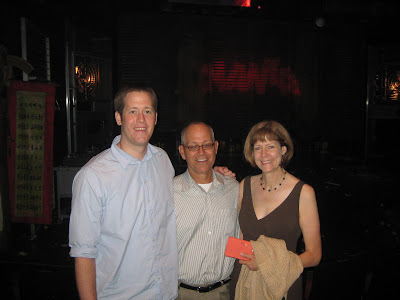 I took my dad to the horse races in Seoul.  The Korean government owns and operates the horse races here in Seoul.  The place is gigantic and is packed with Koreans trying test their luck.  All of the betting is done through machines which I thought was extremely efficient.  Below is a picture of where the horses are shown before their race. 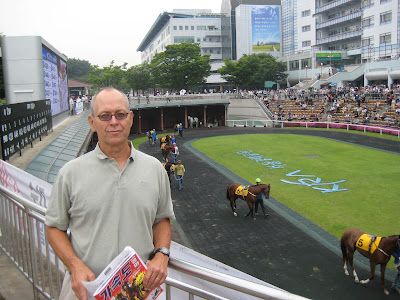 The park has a "Foreigners Section" that is located on the 4th floor.  They provide you with racing forms in English and seating gives you a great view of the track. 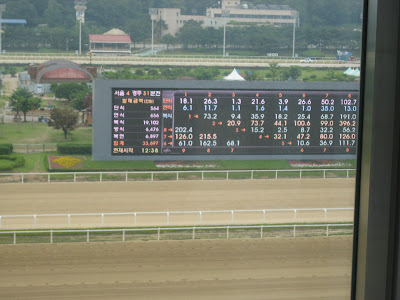 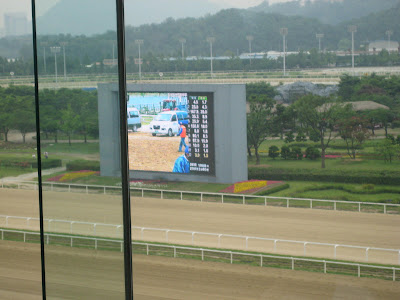 The English racing form that they give is very handy in my opinion but it lacked the detailed information that my dad deems necessary to make an intelligent bet.  We bought a Korean racing form and tried to figure out what the numbers meant.  We were unsuccessful and neither one of us cashed a ticket. 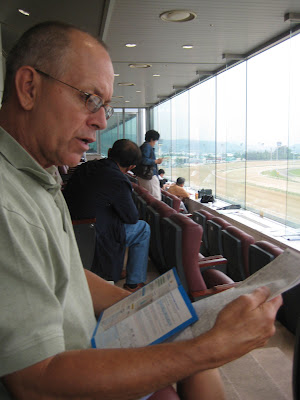 During their second weekend here, Kim wanted my parents to experience a Thai Massage.  It costs about $55/hour and it is located in Gangnam on Line 2.  When it began the lady asked me if I wanted it soft, medium or hard.  I chose hard and there certain points when I was in excruciating pain.  Afterwards though, I do not think my body has ever been so loose and relaxed.  Below is a picture of Kim with my parents waiting for our massage.  They serve you hot tea as you wait.  It was nice. 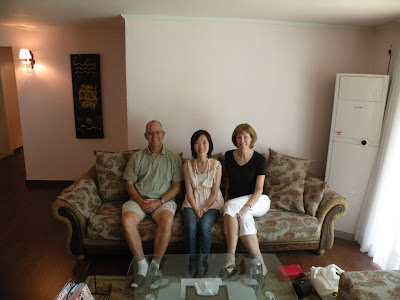 Reinvigorated after our massages, we headed over to Sports Complex (Line 3) to see a baseball game.  The game was between the LG Twins and the SK Wyverns.  The tickets ranged from $8-$20/ticket.  The stadium is divided in half with the visiting fans on one side and the home team on the other.  Since we did not buy our tickets until we got to the game, we had to purchase tickets on the visitors side which was not nearly as crowded.  Below are some pictures of the stadium and the game.  You will notice how everyone is holding red inflatable bats.  They are used to bang together when the crowd is cheering. 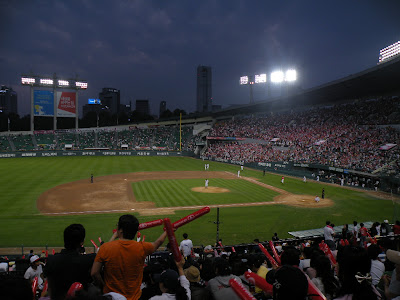 Korean baseball games are pretty cheap to attend. As mentioned before, the tickets are inexpensive, AND you can just buy your beer for the normal prices at convenience stores located both inside and outside the stadium. Can't beat that! 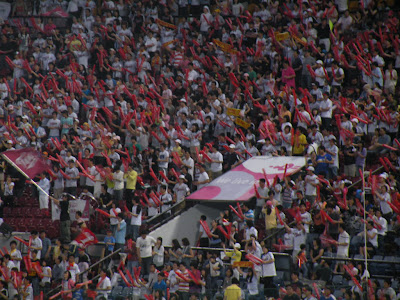 Each side has for lack of a better word what I would call cheerleaders.  They consist of one guy on a microphone leading the cheers and a couple of girls dancing.  I have to admit that they did a great job getting the crowd involved because the stadium was very loud even though it was only about half full. 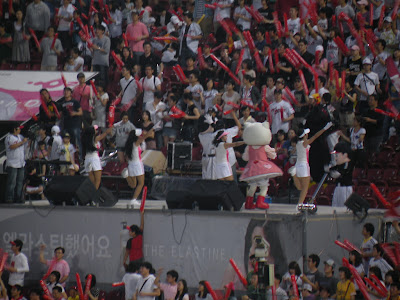 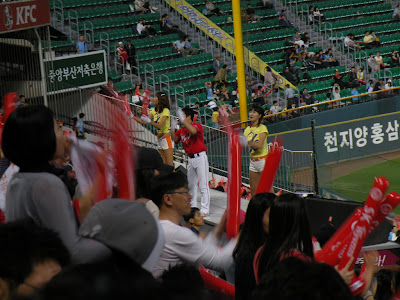 In Korea they do not have batboys but instead they have batgirls. 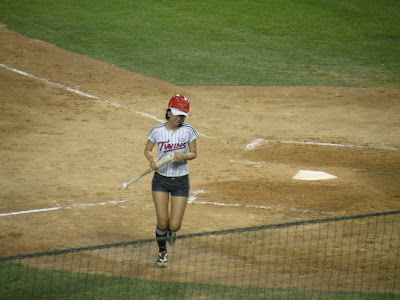 A few actions shots during the game.  SK was leading by 2 most of the game but LG came back in the 8th and ended up winning 3-2. 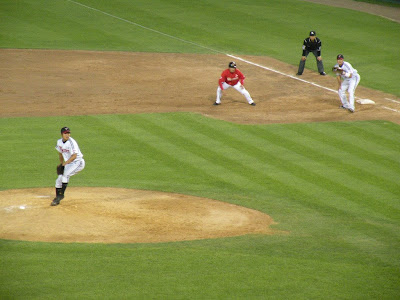 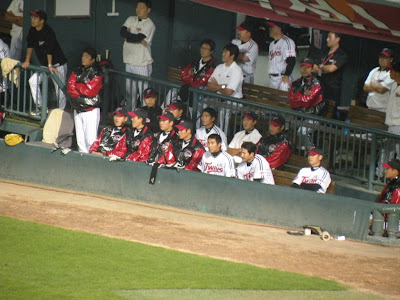 I was trying to capture a batter in mid swing but I was unable to.  This was the best one that I got. 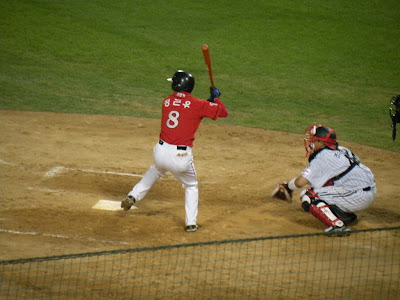 The next morning Sang Kwan joined us from some brunch in Itaewon.  We ate at a restaurant called Gecko's.  I have the hardest time finding good western breakfasts here in Seoul, especially ones that open before 11:00 A.M..  The food was not too bad.  My dad was the only one who ordered breakfast and he said his pancakes were good. 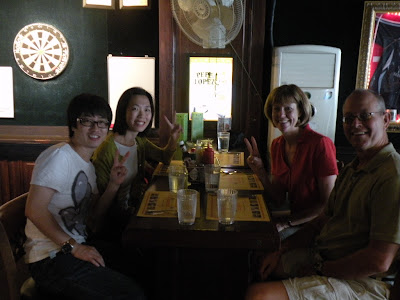 We headed over to Namsan Tower after our meal.  You might not remember but Kim and I had been here once before with her Father.  That was at nighttime though so I was kind of excited to see it when there was light out.  Sang Kwan parked at the base of the mountain.  You can either hike up a trail or take the cable car.  We chose the cable car. 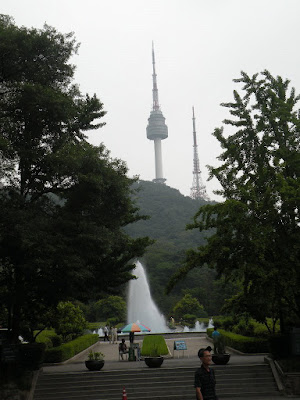 The 5 of us posing in front of the fountain.  I am not sure why the Asians are posing like that.  I guess it is a Korean thing or maybe a brother and sister thing.  Who knows? 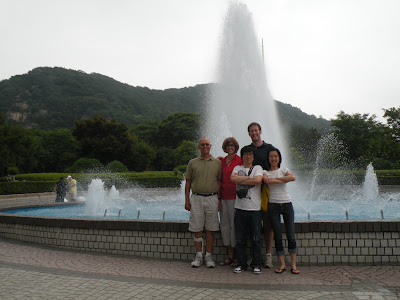 The parking lot was about a 20 minute walk from the cable car pick up.  I was worried about my dad making down the stairs on his ankle but he got to the bottom just fine. 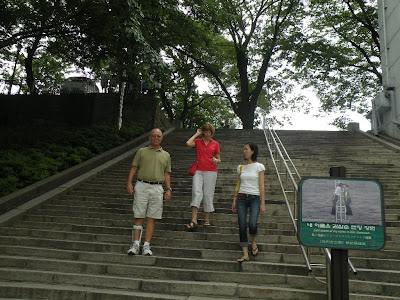 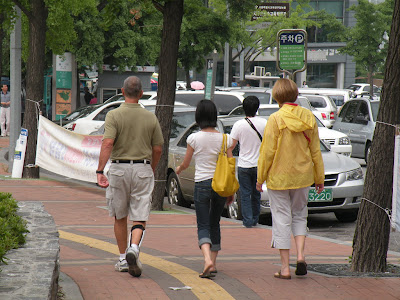 This is the view from the cable car about half way up. 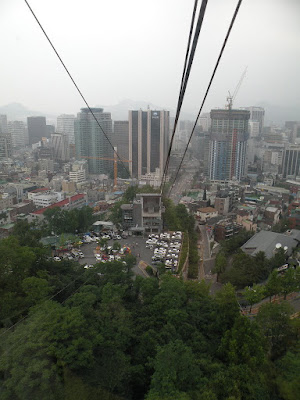 This was a common view of my dad during their trip.  He was constantly writing down notes in a journal that Kim bought for him.  He did not want to forget anything that he and my mom did or experienced. 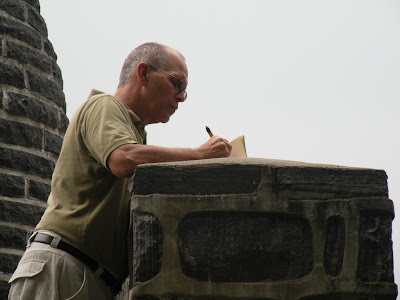 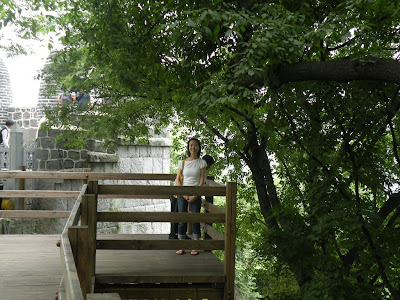 A shot of the tower before we head up to the top. 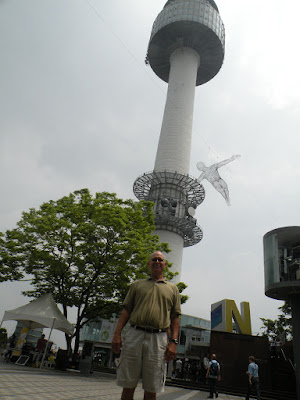 A couple of views from the top.  You can really see the entire city from up there. 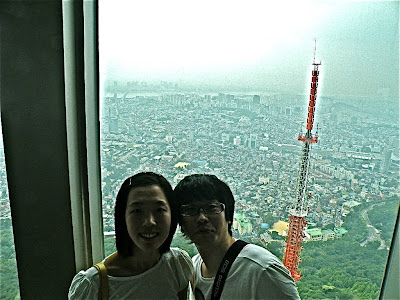 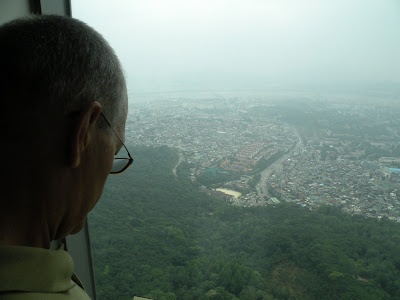 Kim got a little tired and had to take a rest. 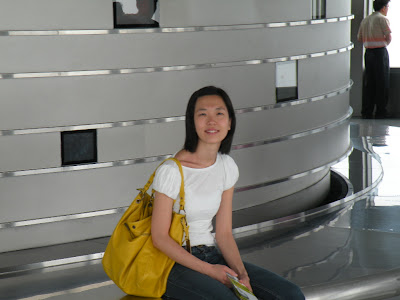 We we got back down to the bottom, there was a magic show going on.  We only got to catch the tail end of it but it seemed pretty good from what we got to see. 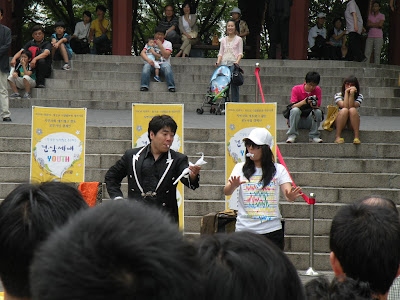 That night we decided to go to Noryangjin Fish Market for dinner.  We ordered king crab, shrimp, live squid and a shell fish whose name I do not know in English.  This was my first experience with live squid and it was a lot tastier then I thought it would be.  The restaurant cuts the squid into little pieces and the tentacles are still moving around.  They were actually pretty hard to pick up with chop sticks because the suction cups were sticking to the plate. 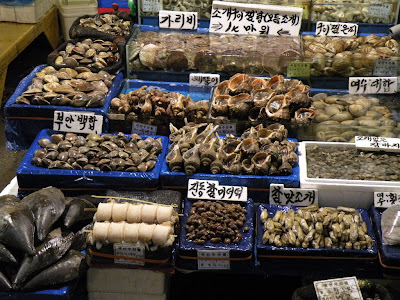 The guy we bought our fish from took us to a really cool, unique restaurant to eat at.  We sat on a roof top patio and the breeze was very relaxing while we were eating. 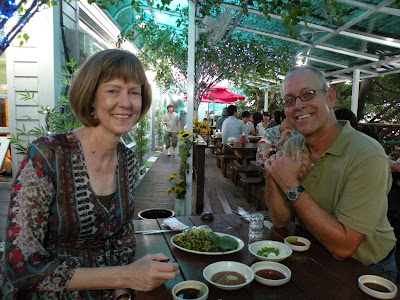 On my parent's last day in Seoul, my boss told me that my parents should come visit the school.  Initially, she was hesitant to let them come because there was a recent Swine Flu scare that was related to several American teachers in Korea.  But she ended up changing her mind and my parents stopped by after lunch and spent about an hour at the school meeting the kids and teachers.  Below is a picture of us with Kim's class. 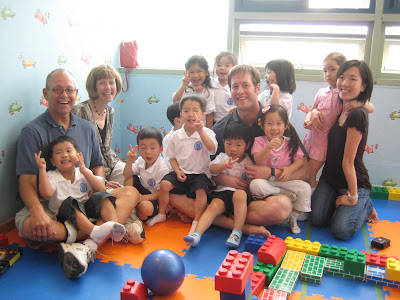 Both Kim and I were very sad to see my parents leave.  Their two weeks went by way to fast.  I am happy that they had such a great time and I think they got to see everything they wanted to see.  Kim and I are eagerly awaiting her parents who will be coming in October.
Posted by Unknown at 6:02:00 AM 3 comments: