K: Last Friday, I got a package slip in the mail. Went to the post office and saw a package from the Korean consulate.

Upon first opening it, I began to get nervous because all I saw was my passport being returned to me. But when I flipped through the pages.................. 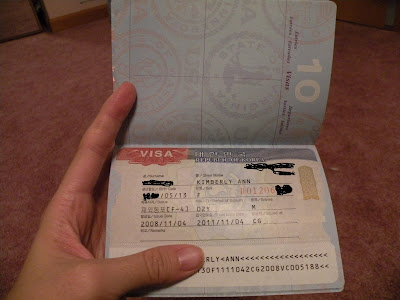 Our trip to Chicago was officially a success! WHEW!
Posted by Unknown at 7:01:00 PM 4 comments:

K: The main point of going up to Chicago was for my F4 Visa.


**DISCLAIMER: This post will be pretty technical and may not be that interesting unless you're adopted from Korea and securing an F4 Visa. I just want to put my knowledge of the subject out there for any other US adoptees, since I used a lot of other sites to gather information and figure I should share what I know.**

I called up to the Chicago Korean Consulate to find out what I needed to secure my Visa. They told me I needed to relinquish my Korean citizenship as well as apply for the Visa.

It was very confusing and no one at the consulate speaks very clear English, which compounded the problem. I called my adoption agency and they had a post-adoptee service department, which was very helpful. A lady was able to walk me through the paperwork that I needed.

Below is the paperwork needed for approval for each step and an explanation of what it actually is.

Relinquish Korean Citizenship (this takes 2-3 months)
- Relinquishment of Korean Citizenship form: The Korean consulate will fax you versions in both Korean and English. Just need to fill out the English form if you don't speak Korean like me. The form also has spaces for Name (Head of Household) and Permanent address (as shown on the Korean Family Census Registration). Put "unknown" for both, since those were given up when you were adopted.

- Copy of Korean Family Census Registration: This is the Korean birth certificate. It should be typed up, not like a traditional birth certificate. I found mine in with my Notice of Approval of Relative Immigrant Visa Petition paperwork. It will say "Ho Juk Deung Bon" at the top of the paper.
- Copy of US Citizenship Certificate: These is your US naturalization certificate. Make sure to bring the original, they'll ask to see it.

- Copy of petition for name change: Make sure there is paperwork that shows the original Korean name and your new American name. Also, if your name changed with marriage (like mine) bring copies of your marriage certificate.

- Self addressed stamped envelope: They say to just put a 41 cent stamp on there, but at the Post Office, I was told they prefer I use an 8x11 Express envelope with tracking capabilities. The postage cost more like $16.

- There is no fee for this portion.

- Original passport and copy of passport

- Copy of US Citizenship Certificate: Again, just make another copy of your naturalization certificate.

- Copy of Birth Certificate: This is the new American birth certificate with your adoptive parents names.

- Copy of Petition for name change: Same as above, just make copies of the petition and marriage certificate (if applicable)
- Fee of $45: Can get money order at the Post Office when getting the self addressed stamped envelope.

- Self addressed stamped envelope: same type as envelope for the relinquishment of Korean Citizenship


The Korean Consulate is open between 9 and 5 Monday through Friday. Before making the trip, I called to make sure they would be available the day I planned to visit.

It's located in the NBC building. 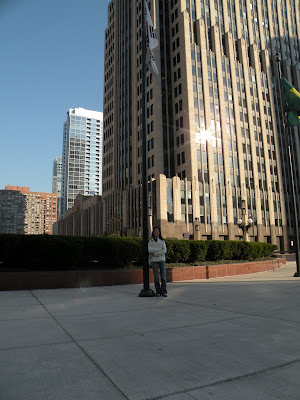 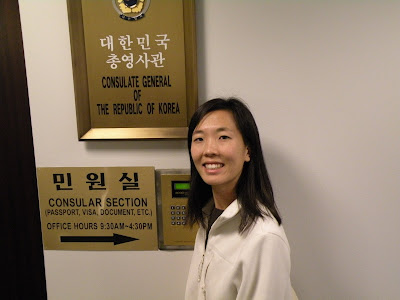 Going to the office almost feels like going to the DMV, but they don't really speak much English. The people working in the office are not very helpful at all. If you're missing any paperwork, they don't offer solutions, just tell you that you need it. End of story.

I had an issue with my name change since the copy I made didn't show my original Korean name. They kept saying that I needed that and needed to either call my adoption agency or "my government." Fortunately, just as I was getting incredibly frustrated, I turned over the original and found my Korean name. Whew.

The main advice I would give is to have all your paperwork together and ready to go. If you have any questions or need any guidance, I'm happy to help (as much as I can). Just shoot me a note at Markim916 at gmail dot com.
Posted by Unknown at 8:05:00 PM 1 comment:

K: Last weekend, Mark and I traveled to Chicago to secure my F4 Visa at the Korean consulate. I will include more detail of the visa process in the next post. This post will focus on the fun part of the trip, which included a little bit of sightseeing and a lot of eating.

We left at 1:15am on Sunday morning on the Megabus. I had never taken it before, but it's basically a double-decker bus that travels around the midwest. I think the St. Louis bus goes to Columbia, Kansas City, and Chicago. (I know there are other locations I'm missing, but those are the big ones.) The bus picked us up along the side of Union Station. (Right where Have a Nice Day Cafe used to be, for those who are pathetic enough, um, like me, to know where that is.) Taking the bus ended up being a GREAT decision. We got there in about 5 hours, with a half hour break at a rest stop in the middle. Also, they have free WiFi, which is fantastic.

When we arrived in Chicago, we walked about 2 miles in the dark at 5:30 in the morning to our hotel. We stayed at the Holiday Inn Express on Wabash and it was great. The room wasn't very expensive and it was right in the middle of everything. Also, the people there were nice enough to check us in when we arrived at 6am, so we got to crash for a couple hours.

Sunday morning we did the typical touristy stuff, walked to Navy Pier and took pictures of the water. 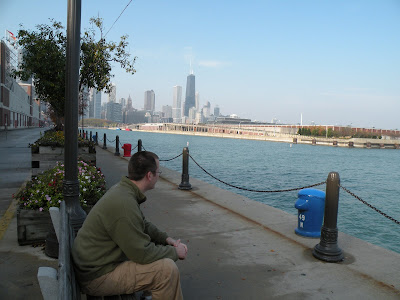 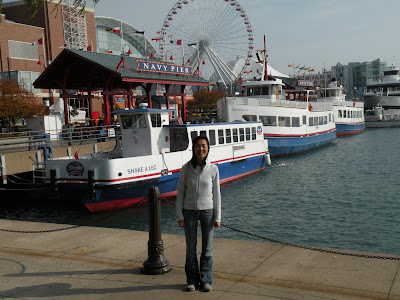 After walking around the city for awhile, we decided to check out the Museum of Contemporary Art. We figured we'd spend a couple hours there and expand our minds culturally. We lasted all of 45 minutes. Other people were gazing thoughtfully for hours at flashing neon lights with random words strung together and videos of mice running through mazes while someone pounded on a bag with a hammer. Frankly, we just didn't get it. 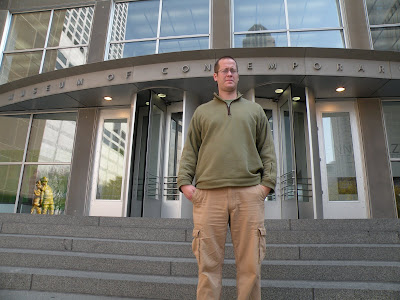 We decided we needed something a little more our speed, so we stopped by a nearby Mexican restaurant for... the most horrible margaritas we've ever tasted in our lives. I think the guy just poured tequila in the glasses and called it a day. I was literally gagging with every drink I took. Ugh. 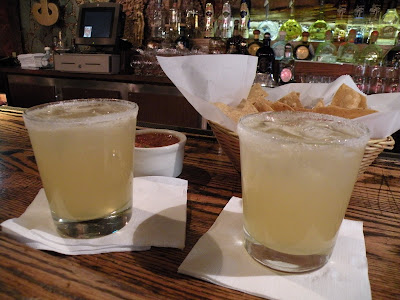 Our best decision of the day was getting deep dish Chicago pizza for dinner. It was fantastic! 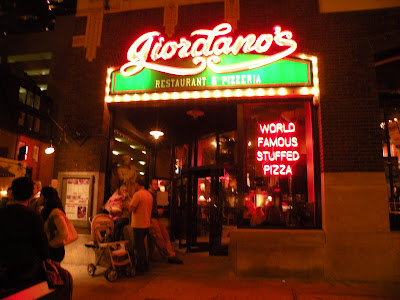 Look at Mark, doesn't he look like he's drooling? 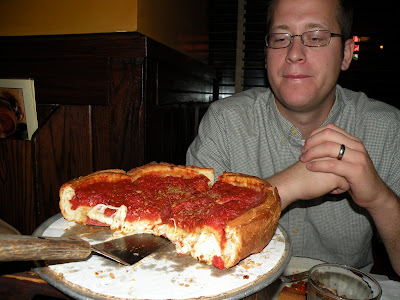 There is no such thing as too much cheese! 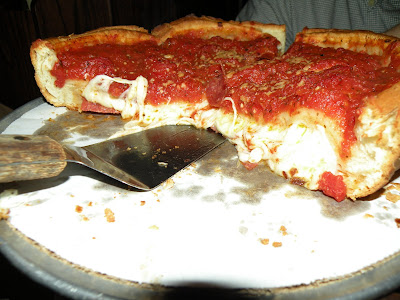 The weather was so great, we tried to eat at outdoor cafes and people watch as much as we could! 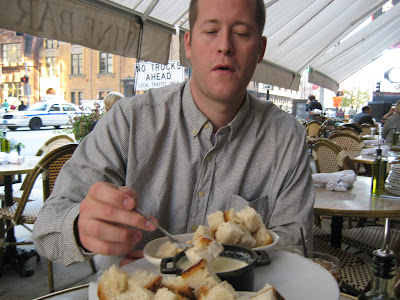 The second day, after we got my visa taken care of that (more on the next post), we just hung out around the city -- walking around and taking it in.
That night, it was still unbelievable out, so we found a couple outdoor places to eat and have a couple drinks. 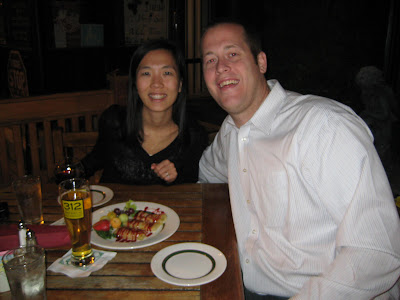 I'm posting a close up pic of this because it was melted brie in a crepe with rasberry sauce. *drooling* 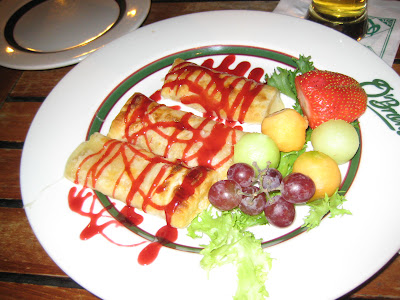 And later that night we went to a local comedy club, Zanies. There were 4 comedians, and about 12 people in the audience. The main act mostly talked about what it's like to be approaching 30 and living at home with his parents. Boy, could we relate. "It's just so funny cuz it's true..." 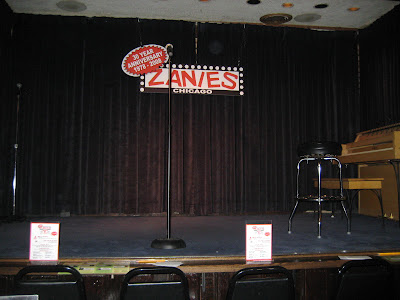 We returned back to St. Louis on Tuesday afternoon. All in all, a great trip.
Posted by Unknown at 7:00:00 PM 3 comments: